In my reinterpretation of Sister Act (last post), I began a tale of how nature and nurture are so intricately co-dependent that without a secure understanding that you are free to both style your own destiny and to create a supporting tribe, a life-story can transition from fairytale to horror flick with or without the assistance of scary monsters.  A life can go off the reel simply by being uninspired: no need for tragedies or down-and-out tales.

I have to admit, it was difficult writing the Sister Act post – not because of vulnerability, but because I could have written a BOOK with all that I have to say about cultural conditioning, the squelching of authenticity societally, and the impact both of these had on my own life. I’ve pared things down in these Sister Act posts and they’re really just overviews of my experiences, and because of that, they don’t go quite to the level of vulnerability that I believe is crucial to shift the fear of folks just being their unmasked selves. Really, there shouldn’t even be a need to attach a concept such as “vulnerability” when sharing life experiences: being me as me, being you as you is NORMAL. Unfortunately though, we are still buying into the crap that we should conform to a predictable sameness: a boring, colourless, inspirationless, stifling, robotic sameness rather than innate, primal, compelling, exhilarating, gratified uniqueness. Being “vulnerable” i.e. the real me with you, is one way I can personally contribute to the fabulous ripple-effect that my encouragement of you to be you will naturally bring. I commit to share as intimately as need be in future posts as I break my personal movie out into smaller soundbites. 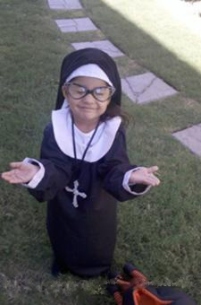 I don’t know exactly what genre Sister Act II falls into: in the 20 year span from the point where I thought I had an absolutely sure vision of where my life was going, to the point of WTF and surrendering to my spirit rather than trying to direct it, my bio-pic runs the gamut of themes: family film, chick-flick, mystery, horror… yikes, crime too; I’ve lived more than one medical drama, a war (with myself) story, definitely some comedy, and lots of educational content. While more than a few of those twenty years felt completely fictitious- often even animated (like a representation of me but not me), I think I’ll summarize this particular story arc as “action-adventure”: though oftentimes in the moment, I really didn’t appreciate the adventure. (I sure hope it is a period-piece.)

What those 20 years basically brought to light is…  that when you are not consciously living-  living with that kid-in-your-heart, live-it-out-loud authenticity, with a truly supporting tribal-cast, the universe defaults to become your primary tribesman, offering up whatever scheme it needs to get you to check in with yourself. Act One of my universal butt-kicks was during that period referred to in the last post at age 16, when, ultra-bored, I began lobbying my parents to change schools: sensing inherently that I needed a new tribe. Having elicited no concern from my parents, I abandoned any further action. SMASH!!! The universe brought me action…. in the form of a semi-serious car accident, which in complete sarcasm, could have wiped out half of my ill-fitting tribe: my then girl-posse was in the car with me… I was driving. It was a strange night: the girlfriends and I were unusually quiet, not much traffic, I turned left, we were broadsided at 50km/hr., spinning into a merciless pole.  Whew that my broken nose was the only visible casualty (besides my temporary insanity: “maybe Mom won’t notice the dent” I told my first-on-the-scene big bro!) My posse got trips to Hawaii via the insurance money; I got a decades-long limiting belief. My parents never spoke of the accident to me past that night: apparently my 4th-child, sibling-induced pattern of being so competent and not needing much direction led each of my parents to interpret my quiet calm as “handling things well”: no need to rock the boat.

In reality I was in a state of shock, feeling 3-yr-old-little-girl-fear, desperately needing someone to come hold me and give me words to understand the startling randomness of life and the perceived personal failure that the accident provoked; and, just to have someplace safe to cry. Reminiscent of my actual age three when my Mom “disappeared”, and, with no conversation around it everyone just got on with things (per last post, she was in hospital for an extended period due to a car crash), this incident simply reinforced my belief that when life is confusing: you just figure things out by yourself… and get on with it.

Act Two… I continued on my conveyor-belt life: college… first job… up the ladder to second job… next rung third job. I had new players in my life but they were typecast per the uninspiring others, so trusty old universe stepped in again:

Do something that
your future self
will thank you for.